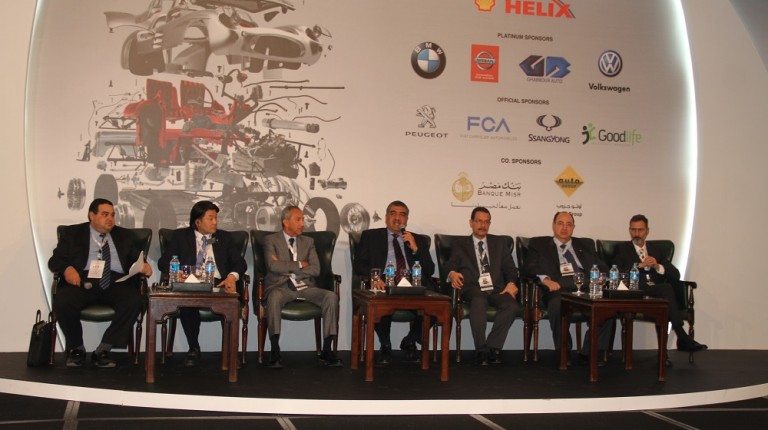 As the fourth annual summit of the Egypt Automotive Conference approaches next December, a number of auto industry figures have set high hopes for the upcoming summit amid a sharp drop in sales.

The experts demanded that all the challenges faced by the sector be exposed to a sharp drop in sales volume, stop pumping new investments, exit a large slice of purchasing power, and put forward the government’s vision for the development of the automotive industry, prepared through the strategy and submitted to the House of Representatives for its approval.

Daily News Egypt conducted a survey of opinion, including a number of experts and workers in the automotive sector, to reveal the most important axes that they would like to discuss during the Fourth annual summit Egypt Automotive, in addition to identify the demands of the sector in the discussion of government bodies concerned with the automotive industry.

Minister of Public Business Sector Ashraf El-Sharkawy inaugurated the third summit of the future investment opportunities conference in the automotive sector, Egypt Automotive, which was held in December 2016.

The conference focused on how to motivate international companies to invest in automotive components, accelerate the application of international standards in local products, and the importance of establishing a higher council for cars as an entity that combines market parties and prepares policies for the advancement of the sector.

The conference dealt with the details of trade agreements aimed at export growth, namely Common Market for Eastern and Southern Africa (COMESA), Agadir and the European Partnership, the plan for the establishment of the SCzone, and the role of the private sector.

The following are the views of the leading experts in the auto industry and the food industries in their poll on the fourth annual summit of the conference.

Raafat Masrouga, honorary chairperson of the Automotive Market Information Council (AMIC), the former president of the Automotive Engineering Company, has asked to discuss issues of concern to the local consumer and ways to reduce car prices locally by considering alternative opportunities through which some parts can be replaced in the car.

Masrouga also called for a discussion of the Mercosur Agreement, which will lead to the sale of the Egyptian product more than the value of the importer. This will affect the local product as well as the discussion of the new Investment Law and the strategy of the automotive industry. Final, for its role in addressing the obstacles facing the return of the auto industry again.

Masrouga welcomed his participation in the 4th Arab Automotive Summit, hoping to include representatives from sectors related to the automotive sector, including the Central Bank of Egypt (CBE), the Ministry of Investment and International Cooperation and the Ministry of Industry and Trade.

The current situation of market needs to be consulted: executive director of manufacturers association

Hussein Mustafa, the executive director of the Association of Automotive Manufacturers, expressed his pleasure at the conference and summit of Egypt Automotive, especially that the current situation of the market needs consultation between the private sector and the government sector, and discuss the critical situation experienced by the automotive sector.

Mustafa added that with the increase in prices and shrinking sales, it appears to all that a large segment of consumers of economic vehicles disappeared from the sales map, which has affected the main car sales.

The Minister of Industry and Trade, the Minister of Investment and International Cooperation, and members of the parliament’s Industry Committee are expected to discuss the government’s vision towards the automotive industry as well as the participation of automotive companies from agents, manufacturers, and feeder industries.

Director General of Bavarian Brilliance: Routine hinders implementation of recommendations
Khaled Saad, director general of Bavarian Brilliance, a member of the board of directors of the Egyptian Automotive Manufacturers Association (EAMA), pointed out the importance of following up the decisions that emerge from Egypt Automotive, pointing out that the conferences come out with good recommendations to serve the sector, but the government routine reflected on them and make them inactive or are carried out very slowly.

Saad sees it of importance to discuss local manufacturing projects during the fourth summit, as well as discussing the importance of having feed-in industries, and the participation of the concerned parties in the car manufacturing strategy in the conference. He pointed out his participation in all the conferences before the annual summit “Egypt Automotive”, stressing that he is willing to take part in the fourth summit.

Osama Abo El Magd, head of the Motor Trade Association, said that the annual summit “Egypt Automotive” is considered a strong gathering of workers in the car sector.

He added that the fourth summit to be held in December will be fruitful given the many cases that occupy the sector, including the new traffic law and the car manufacturing strategy, in addition to customs and several other files that should be discussed in the summit.

Abo El Magd expressed his interest in taking part in the fourth summit of Egypt Automotive.

He demanded the fourth summit to include representatives of the sectors of customs, taxes, traffic, and consumer protection in order to discuss the files that connect them to the automotive sector. Abo El Magd believes that it is necessary to create room between traders and officials in the sector in order to leave room for discussing the largest problems that face them and reach solutions for them.

Alaa El Sabaa, a member of the Cairo Chamber of Commerce and chairperson of El Sabaa Group, said that he hopes Egypt Automotive results in recommendations to be implemented through cooperation of government parties noting that it is important for speakers to look at the general interest rather than their own issues.

El Sabaa noted the importance of presenting the vision of the finance sector and introducing new mechanisms from the banking sector, demanding from banks, with the help of the automotive sector, to activate sales through increasing the credit loaning limit. In addition, financial leasing for individuals should be allowed in corder to activate the car industry.

Regarding the importance of launching the government’s strategy, El Sabaa said that the late issuance of the strategy has affected a large number of car companies regarding development and injecting new investments. “Everybody needs to know the government vision and its direction over the upcoming years,” he said.

El Sabaa demanded Egypt Automotive to launch a traffic awareness campaign sponsored by major companies and motor oil companies, in cooperation with the Ministry of Interior.

Amr Nassar, the secretary-general of the Export Council for Engineering Industries and the executive adviser of the projects of MCV, said that the fourth summit of Egypt Automotive is part of the continued effort during the past four years and must be kept as a platform that is considered the most important in the gathering of companies and car manufacturers in government parties that are concerned with the sector.

He added that the fourth summit must include discussing the conditions of the car sector, and giving an accurate presentation of the current situation and the feed-in industries including the problems and challenges facing workers in the sector. It should also include a presentation of the future vision of the car industry through government parties and their view of the new investment opportunities and attracting them.

Nassar pointed out the importance of Egypt Automotive adopting what the world has reached in terms of developing the system of public transportations in addition to looking at the future, where countries of the world now are more interested in using private cars and developing a decent mass transportation system.

We would like to know state’s trends regarding the auto industry during summit: vice president of Transport Division in Federation of Industries

Samir Allam, vice president of the Transport Division in the Federation of Industries, said that the summit is one of the most important events of the car manufacturing in Egypt and it is considered the platforms that brings together all concerned parties from the government and private companies.

Allam demanded viewing the banks’ vision for automotive financing over the upcoming period and understanding their trends towards facilitating the financing operation while the impact of trade agreements on the Egyptian market, especially the automotive sector, comes clear.

He added that the Industrial Development Authority has to present its map for the lands available for investment with the required infrastructure and all utilities to establish factories on them.

Regarding the most important parties Allam views as important to take part in the summit, he said that the sector awaits the ministers of trade, investment, and military production to present their vision regarding automotive manufacturing and he stressed the importance of the Egyptian Organization for Standards and Quality attending the summit in addition to the Industrial Development Authority.